A bunch of Facebook execs met with representatives of a group that is attempting to impose its will on the company by pressuring its commercial partners.

As it signalled a week ago, Facebook has taken the only sensible and sustainable stance it can in the face of a protracted bid by a political activist group to force it to censor the US President, which is to refuse its demands. While discussion around the possible effects of Trump’s distinctive communication style is perfectly valid, it’s not the place of social media platforms to censor him while he runs the country, nor of activists to attempt to force them to do so.

Nonetheless Facebook did decide to grant one of the group’s apparent desires, which was for a meeting. Since the #StopHateForProfit campaign had already made it clear that nothing short of complete capitulation would suffice, and Facebook had frequently stated it wouldn’t, there wasn’t much point to the meeting.

It took place regardless, after which a member of an activist group affiliated to the campaign, which has the gall to call itself ‘Free Press’, posted a press release entitled #StopHateForProfit Sees No Commitment to Action at Meeting Between Campaign Leaders and Facebook’s Mark Zuckerberg. “During the meeting, the campaign’s leaders discussed the comprehensive set of demands put forth by the boycott effort,” says the release, before offering up the following lengthy comment from Free Press Co-CEO Jessica González.

“#StopHateForProfit didn’t hear anything today to convince us that Zuckerberg and his colleagues are taking action,” said González. “Instead of committing to a timeline to root out hate and disinformation on Facebook, the company’s leaders delivered the same old talking points to try to placate us without meeting our demands.

“I’m deeply disappointed that Facebook still refuses to hold itself accountable to its users, its advertisers and society at large. I was hoping to see deep humility and reflection about the outsized role that Facebook plays in shaping beliefs, opinions and behaviour, and the many harms it’s caused and facilitated in real life. Instead we saw more dialogue and no action.

“These grave harms include the genocide of the Rohingya people in Myanmar, for which the UN found Facebook played a “determining” role; the thousands of paid political ads that dehumanize and stoke fear about immigrants and Brown people that use the same language the El Paso shooter used to justify his murder of 22 people at a local Walmart; the unchecked call from President Trump for law enforcement to shoot Black people; the armed protests at mosques organized on Facebook event pages; and the rampant white-supremacist organizing and recruiting operation that remains on the platform to this day.

“Facebook approached our meeting today like it was nothing more than a PR exercise. But boycott coalition leaders and advertisers understand that the #StopHateForProfit effort is about the lives, safety and freedom of our communities.

“This isn’t the first time our organizations have asked Facebook to clean up its act. We’ve seen over and over again how it will do anything to duck accountability by firing up its powerful PR machine and trying to spin the news. We stand with truth and justice, and have been through this enough times to know when Facebook is trying to play us. Often that looks like policies that look OK on their face but are unenforced or underenforced. For instance, last year Facebook pledged to curtail the spread of white nationalism over its platforms. Yet today I can log into Facebook and find groups that are dedicated to restoring symbols of the Confederacy and the violence and bigotry they represent, and Islamophobia still has a home in both private and public Facebook groups.

“This isn’t over. We will continue to expand the boycott until Facebook takes our demands seriously. We won’t be distracted by Facebook’s spin today or any day. Mark, Sheryl and their colleagues have much work to do to make Facebook a better place for everyone, and they need to get it done now.”

At time of writing we could find no formal response to this release from Facebook, although COO Sheryl Sandberg did attempt to contextualize the meeting yesterday and has published a ‘civil rights audit’ report today. To date, most of the talking on behalf of #StopHateForProfit has been done by the ADL, and we had never heard of Free Press, which has the stated aim of changing the media, so we decided to take a closer look.

“Free Press closely watches as the decisions shaping the media landscape are made and sounds the alarm when people’s rights to connect and communicate are in danger,” says its website. “We focus on saving Net Neutrality, achieving affordable internet access for all, uplifting the voices of people of colour in the media, challenging old and new media gatekeepers to serve the public interest, ending unwarranted surveillance, defending press freedom and reimagining local journalism.”

There are lots of laudable aims there, albeit unilaterally championed by the self-appointed group. In keeping with its quest for greater transparency Free Press makes its annual reports and accounts available for everyone to see and they made interesting reading. The start of its 2019 annual report features the following image, which seems a counter-intuitive approach to defending press freedom. 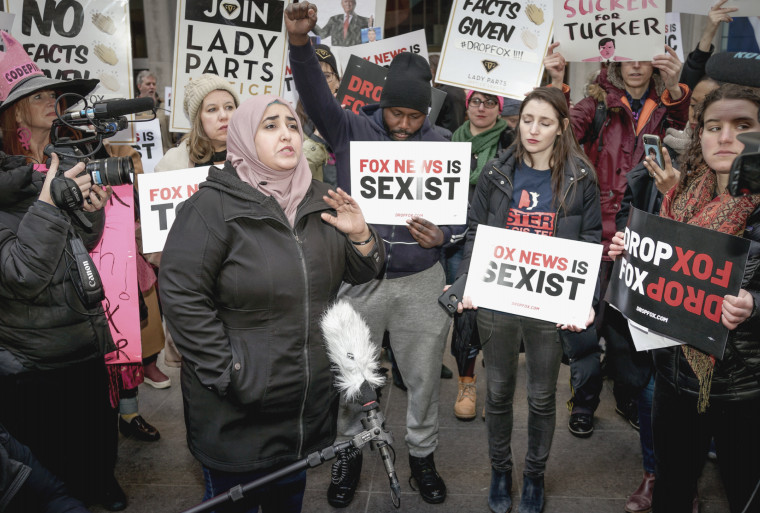 Onto the accounts, Free Press had a bumper 2019, more than doubling its revenues from the previous year to $4.6 million. 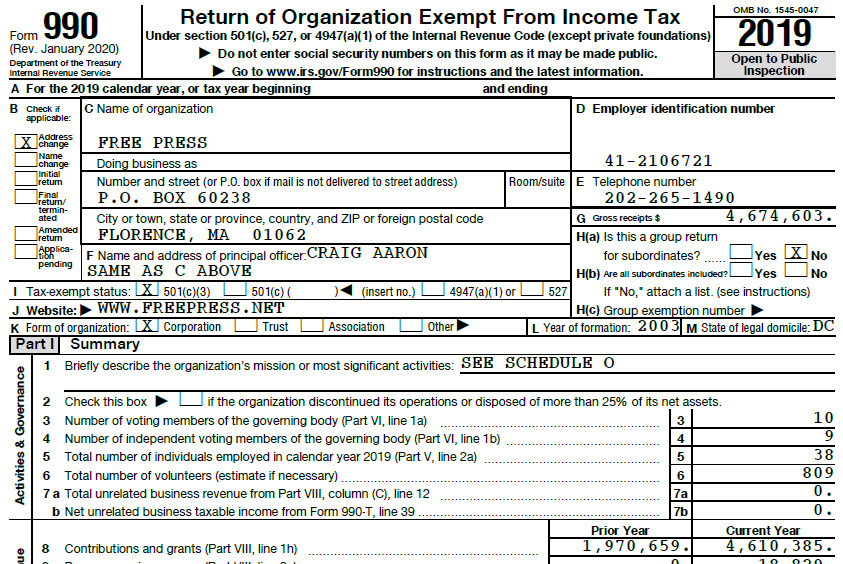 The not-for-profit, which is exempt from income tax, seemed to have no trouble finding a home for the extra cash, however, with compensation and benefits alone topping $3 million. It also seems odd that an apparently lobbying group didn’t spend a cent on lobbying. 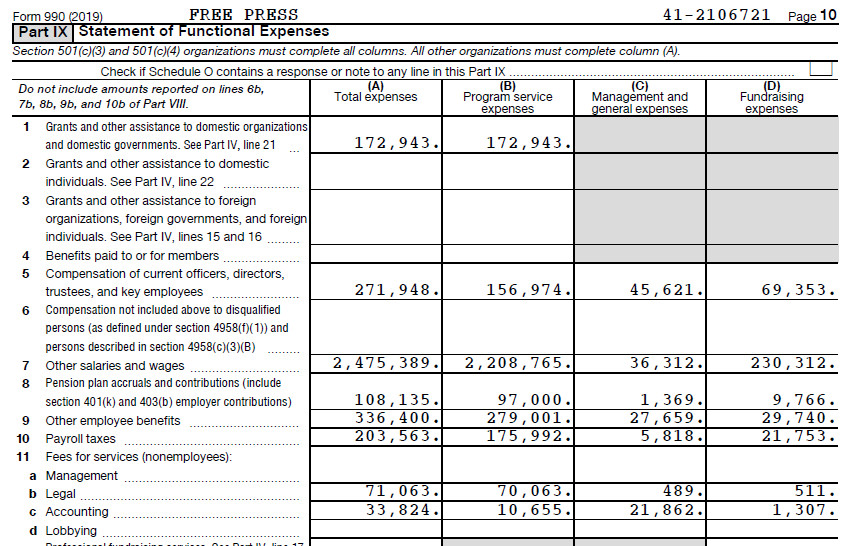 González and her fellow execs each pocketed well over $100k – considerably more than most people employed by the media they seek to change.

“Free Press is completely independent: We don’t take a single cent from business, government or political parties and rely on the generosity of individual donors and charitable foundations to fuel our work,” says the website. The generosity of three individual donors, which it doesn’t name in the accounts, accounted for over $3 million in 2019. It seems transparency has its limits. 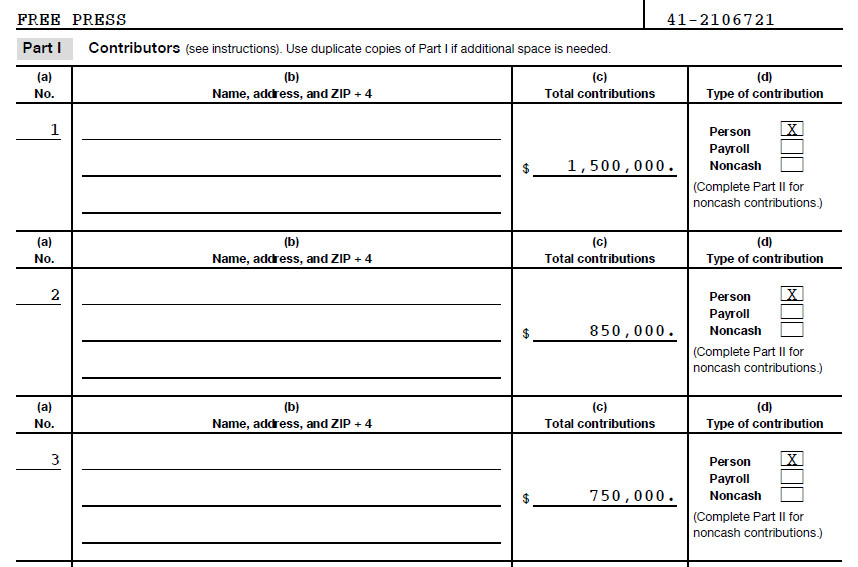 If Free Press does such great work that individuals are prepared to be so generous in their support, then good luck to them. However, as a member of the free press, we reserve the right to query the motives and objectives of an operation that seeks to manipulate all types of media in order to achieve its own political aims.

Yet another example of how @Facebook‘s attempts to placate advertisers, activists and users with words but absent meaningful actions are hollow. #StopHateForProfit #ChangeTheTerms https://t.co/VjdVjsXqYv