France’s auction of mid-band spectrum for 5G services ended almost before it had begun this week, with all four operators acquiring similar amounts of spectrum for broadly sensible prices.

The state raised €2.79 billion from the sale of 310 MHz of 3.4 GHz-3.8 GHz frequencies in a licensing process that was done and dusted by the close of play on Thursday after 17 rounds of bidding over just three days. That might not be a headline-grabbing figure, but it’s also no paltry sum.

Orange came away with the most spectrum, shelling out €854 million for 90 MHz, followed by Altice’s SFR, with a bill of €728 million for 80 MHz. Bouygues Telecom and Iliad’s Free Mobile both picked up 70 MHz for €602 million. The figures include the 50 MHz of fixed price spectrum all four operators committed to acquiring prior to the start of the auction, but do not include any additional sums in the allocation phase of the process that will take place later this month and will see the telcos vie for position on the spectrum block; any spend there is likely to be minimal though.

However, one cannot help but draw comparisons with mid-band 5G sales in other major Western European economies in the past couple of years.

Italy famously generated €4.35 billion from the sale of 200 MHz of 3.7 GHz spectrum two years ago this month. With only two thirds of the amount of spectrum on offer compared with France, but the same number of players, competition was rife and dragged bidding out over several weeks.

Meanwhile, last year the German government elected to reserve spectrum in the 3.7 GHz-3.8 GHz  band for private enterprises, creating fierce competition for the 3.6 GHz band. The country’s three existing mobile operators plus new entrant 1&1 Drillisch ended up shelling out just over €3 billion after as many as 218 bidding rounds. Funnily enough, there were lots of complaints.

The French sale was conservative by comparison, but that’s not to say it wasn’t competitive. The final price for the 10 MHz blocks came out at €126 million, almost double the €70 million base price. Each operator also paid €350 million – payable over 15 years – for a 50 MHz spectrum block, the relatively low price of that spectrum being a trade-off for myriad rollout conditions, including including commitments on business services, fixed access products, indoor coverage and the hosting of MVNOs.

Further, the figures show that the prices paid by the French operators are broadly in line with other major economies, the exception being Italy. Light Reading’s Iain Morris has put together a chart that ranks France fourth in the world in 3.4 GHz-3.8 GHz auctions in terms of price per MHz/pop, coming in behind Germany and South Korea, but ahead of the UK and others. 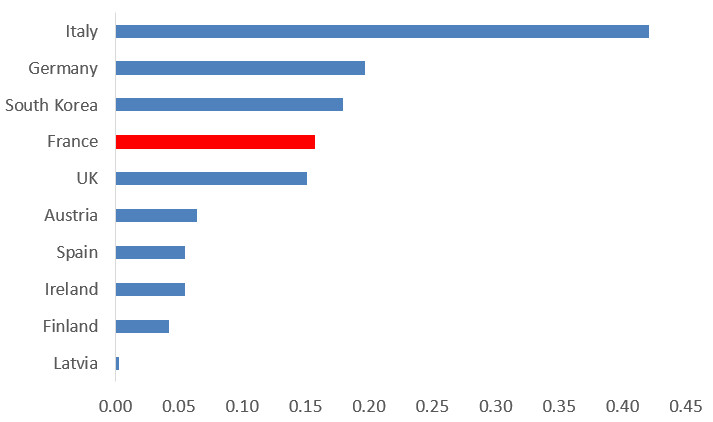 Currency adjusted $ per MHz per population for a range of 3.4-3.8GHz auctions – credit Light Reading

So despite the stability of the French auction process, its operators still spent pretty heavily on spectrum. However, they are happy with the outcome.

Big winner Orange talked up the fact that it secured the lion’s share of frequencies for what it described as “a tightly-controlled total amount” that will preserve its ability to invest in fibre and in improving 4G coverage, it said, as well as rolling out 5G networks, of course.

“It is also notable that the total amount remains reasonable compared to other large European countries, such as Germany,” the telco said.

Bouygues Telecom issued a similar statement, commenting on the fact that the selling prices “compare favourably” to those seen elsewhere in Europe.

Surely this is unprecedented: telecoms operators happy with the sums they have had to spend on the spectrum they need to do their jobs? Vive la France!