Vivo seems to be preparing a competitor against Xiaomi’s Redmi Note 9 Pro with the Qualcomm Snapdragon 720G SoC that’s powering the Redmi phone. While the Chinese company hasn’t revealed any details through an official channel, a mysterious Vivo phone with a model number TD2003F_EX has surfaced on benchmark site Geekbench to suggest its existence. The smartphone has appeared on the site with some key specifications. Also, it seems to be in the testing process at the current stage.

As per the listing on the Geekbench site that was initially reported by 91Mobiles, the Vivo phone with the model number TD2003F_EX runs Android 10 and has 8GB of RAM. The online listing also shows that the phone has a motherboard carrying codename “atoll” that is so far associated with the Qualcomm Snapdragon 720G SoC. Other details about the chipset includes an octa-core CPU with a clock speed of 1.8GHz.

The phone is listed with Android 10, though it is likely to have Funtouch OS on top. Also, the phone received a single-core score of 2,637 and a multi-core score of 6,493. The listing also carries May 13 as the upload date. This suggests that the new Vivo model could be at a testing stage at this moment. 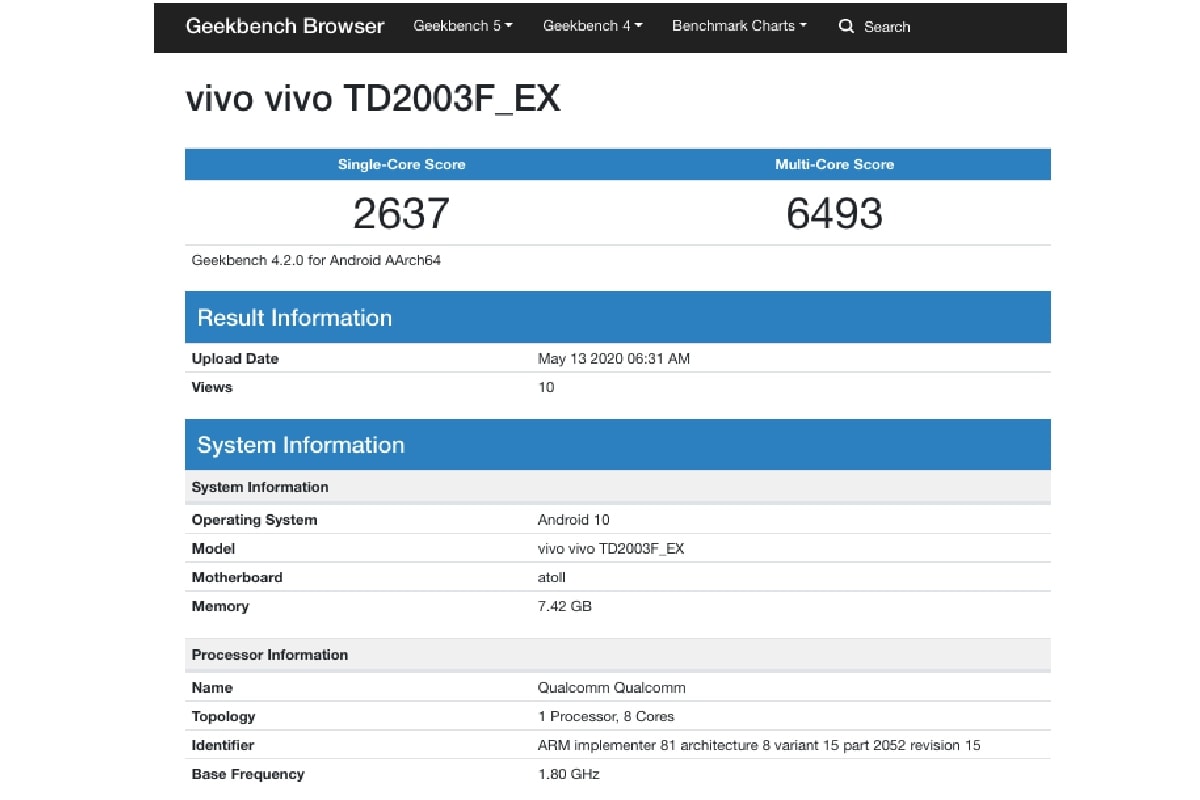 Vivo phone results were uploaded on the Geekbench site on May 13
Photo Credit: Geekbench

Gadgets 360 has reached out to Vivo for clarity on the new model and will update this space as and when the company responds.

Competitor of Redmi Note 9 Pro?
Considering the specifications featured on the benchmark listing, the new Vivo phone could turn out to be a competitor to the Redmi Note 9 Pro that was launched in India in March with the Snapdragon 720G SoC and up to 6GB of RAM. The phone also has 128GB of onboard storage and comes with a quad rear camera setup. Furthermore, the Redmi Note 9 Pro has a hole-punch display with a 20:9 aspect ratio.

All the key features of the Redmi Note 9 Pro makes it a strong contender in the Rs. 17,000 price bracket in India.

We need to look for more details about the new Vivo phone to understand where it stands in the market. Also, pricing plays an important role in the smartphone world, and the Chinese company is yet to go aggressive in terms of pricing while launching its new models especially in India.

Is Redmi Note 9 Pro the new best phone under Rs. 15,000? We discussed how you can pick the best one, on Orbital, our weekly technology podcast, which you can subscribe to via Apple Podcasts or RSS, download the episode, or just hit the play button below.