US mobile chip giant Qualcomm has unveiled its latest 5G modem – the X65 – which claims to be the world’s first to manage 10 Gigabits per second.

On top of that it’s also apparently the first 3GPP release 16 modem-RF system, so it will support all the latest wireless goodness that implies. Qualcomm seems to think this is a fairly big deal, calling it the company’s biggest leap in 5G solutions since the commercialization of its first modem-RF system. It’s already being checked out by device makers and could even appear in commercial devices later this year.

“The 5G transition presents the biggest opportunity for Qualcomm as mobile technology is poised to benefit virtually every industry,” said Cristiano Amon, Qualcomm CEO-elect. “We are reaching a significant milestone with the Snapdragon X65 5G Modem-RF System, unleashing connectivity up to 10 Gigabits per second and support for the latest 5G specifications that will play a critical role in enabling new 5G use cases not only for redefined premium smartphone experiences, but also opening a new realm of possibilities for 5G expansion across mobile broadband, compute, XR, industrial IoT, 5G private networks and fixed wireless access.”

“Snapdragon X65 brings together all the key 5G breakthroughs expected from the world’s leading wireless innovator,” said Durga Malladi, GM of 4G/5G at Qualcomm. “Our fourth-generation 5G modem-RF system is designed for 5G launches globally and brings major innovations from modem to antenna along with extensive spectrum aggregation capabilities across sub-6 GHz and mmWave. This will fuel the rapid expansion of 5G while enhancing coverage, power efficiency and performance for users. And with extended range, high-power capabilities, Snapdragon X65 and X62 are also at the heart of the expansion of 5G into fixed wireless access and cloud-connected computing opportunities.”

Qualcomm was kind enough to break down all the features and benefits that make this modem its awesomest one yet, but we’ll spare you the gory details. Suffice it to say that by the end of the year, all the cool smartphone vendors will have one of these in their flagship devices. That’s probably too soon for the next Apple iPhone, but should make it into the 2022 model.

Whether or not any of those phones ever reach 10 Gbps mobile broadband speeds depends on a lot of factors outside of Qualcomm’s control and that speed has probably only been clocked in controlled conditions. But that still represents a silly amount of over-the-air bandwidth considering your correspondent is happy enough with his 35 Mbps EE 4G connection, so credit where it’s due. 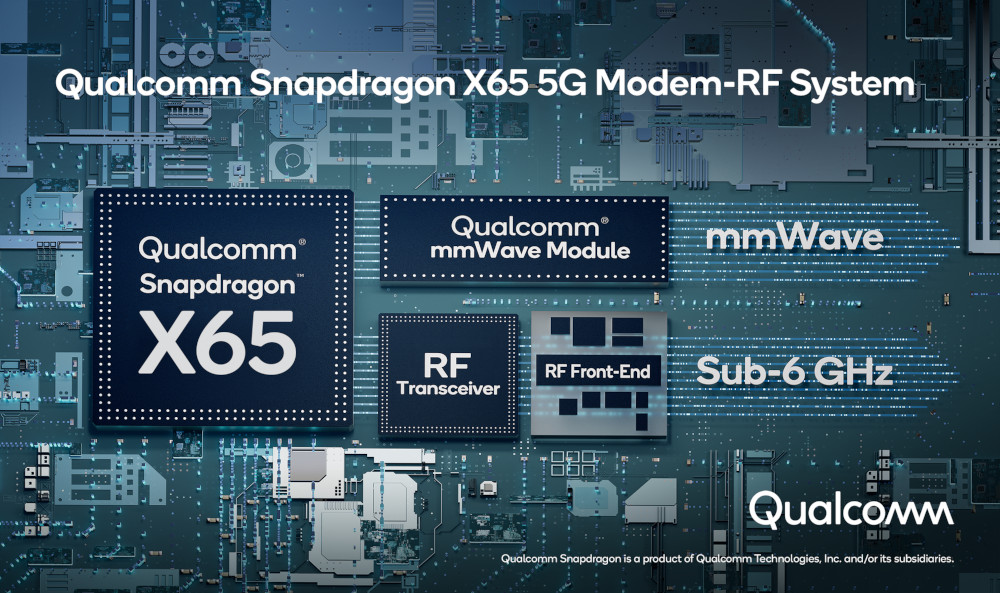