China seems to be falling out with everyone these days, as symbolised by the popularity of an Indian app designed solely to help uninstall Chinese ones.

The FT reports that ‘Remove China Apps’ was taken down from the Google Play store because Google’s policies don’t allow apps that help people delete or disable other apps. Judging by the cached app page, which you can see a screenshot of below, the developer tried to get around that stipulation by insisting the app merely served to inform people of the country of origin of their apps. If so, they somewhat undermined that effort with the naming of the app. 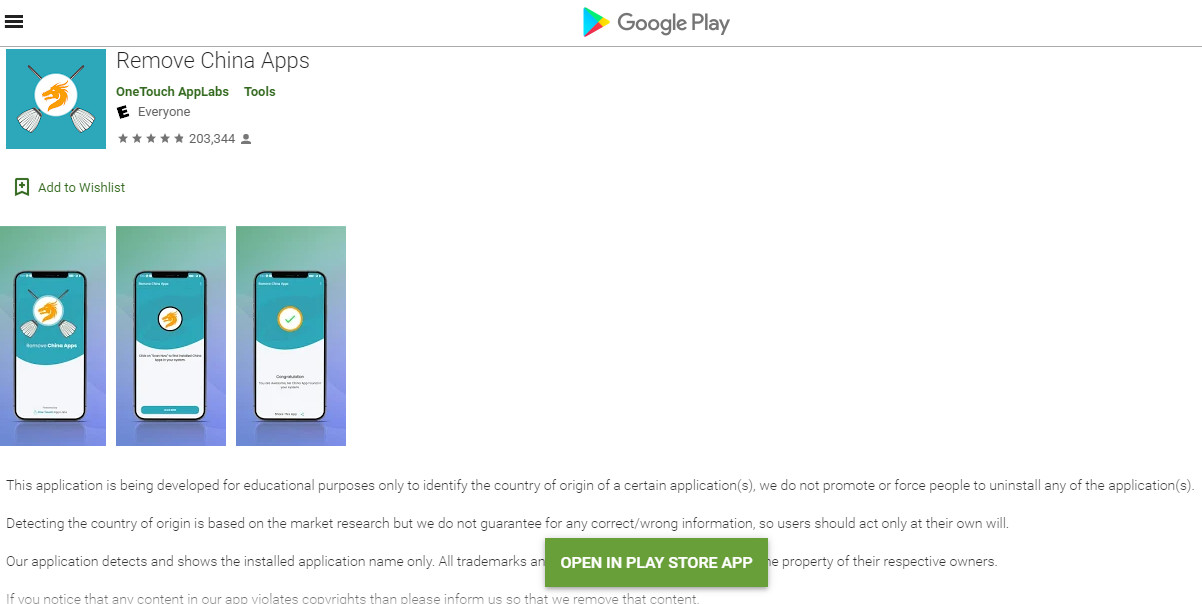 Onetouch Applabs, which developed the app, managed evade the Android police for a week or two, however, in which time it was apparently downloaded five million times and was briefly at the top of the download chart. The most intriguing aspect of this story is not that the app was taken down, but that it was so instantly popular.

“The focus of the prime minister Narendra Modi’s fifth televised address on Covid-19 was ‘Atm Nirbhar Bharat’ or a self-reliant India,” explains the developer. “Remove China App will help people to support “Atm Nirbhar Bharat’ by identifying  the origin country of the applications installed in their mobile phones.” Modi doesn’t seem to have named China specifically, but there’s plenty of evidence that’s the country he’s most keen to be less reliant on.

At the end of April India moved to protect its domestic assets from Chinese acquisition. More recently there has been significant tension at a bit of disputed border between India and China, at the Galwan Valley. The belligerent in that dispute appears to have been China, which is especially keen on claiming random bits of land these days.

Symbolically, the Galwan Valley region is near the ancient Silk Road between China and Europe/Africa. China’s Belt and Road strategy takes its name from that and is generally viewed as an attempt at economic imperialism. With India growing increasingly hostile to China and the US ramping its own antagonism, the country is running out of people to do business with. Unfortunately China seems likely to double down on its own belligerence in response to this resistance, which makes a new global cold war ever more likely.